Hopefully I convinced you last week that the CW is not a network only for hordes of giggling teenage girls.  Now that you know that it’s the home of interesting programming for adults, male and female alike, I’d like to guide you to some shows that you might enjoy.  What better time to catch up and join in then during December and January, when all that is on is reruns anyway?

I’ll guide you through the schedule by day, and it’s easier than most networks.  The CW only has hour long shows, and they only have two hours of primetime a night, for a total of ten shows. 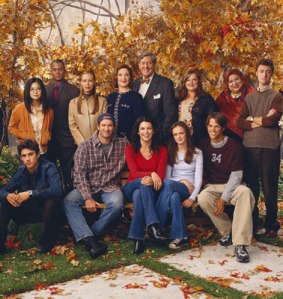 Did you love all the small town hijinks of Gilmore Girls? But, did watching Lorelei making poor life choices and forcing her daughter be the responsible one make you overly anxious and queasy?  Good news! Hart of Dixie has all the lovable characters from Stars Hollow with none of the stress!

HofD follows Zoe Hart, a NYC surgeon who inherits her father’s small town Alabama family practice.  There’s a little bit about her patients, but mostly only so zaniness can ensue.  Other main characters include Wade, the good looking, wise-cracking bartender; George the straight arrow lawyer; Lemon the southern belle antagonist that is so much fun you never really end up hating her; Annabeth the chipper, goodhearted friend; and Lavon, the former football star/mayor.

Half the fun of watching is seeing what they’ll dress Lemon in next.

There’s even a kooky couple that eventually get married and the groomsmen all dress up as Jedis and the bridemaids are elves.  It’s in its third season.  Past seasons are on Netflix; the current one is on CWTV.com or Hulu.com.

Ugh, even the title card for this show is terrible. How brave is your love? I think I just threw up in my mouth a little.

Beauty and the Beast comes on after HofD, but it’s horrible and soon to be canceled according to TV by the Numbers’ Cancellation Bear, and the Bear is rarely wrong.  I’m shocked that it made it out of its first season, frankly.

If you thought Emily was dangerous with a red Sharpie, you’ll love watching Klaus’s reign of terror.

I do a little TV dance on Tuesday nights these two shows make me so happy.  If you liked that first twisty delicious season of Revenge, with the dark plotting and shifting alliances, then you’d like The Originals.  Okay, if you absolutely cannot watch another show about vampires, werewolves, and witches, then I suppose you might not like The Originals, but even then I feel like you should give it a shot.

The show follows three siblings:  Elijah (the noble one), Rebekah (the passionate one), and their half brother Klaus (the wounded one that has a tendency to be more villain than hero).  They are half of a group of siblings (the others are unimportant) that were the original vampires.  Klaus also has the benefit of being a hybrid (he had a werewolf dad).

Besides the Originals, the show has warring clans of witches, werewolves, and regular vamps.

The series takes place in New Orleans with numerous other supernatural creatures engaged in power struggles.   All of that is fun window dressing, but the show is about these three and whether or not they are going to trust each other and come together as a family, or try to kill each other.  The actors that play the three are just fantastic and mesmerizing.

For more delightful Originals mayhem, go back and watch them on The Vampire Diaries.

The siblings all began as villains on The Vampire Diaries, so if you want to see more of them (you will), you can watch back seasons of that show on Netflix.  Otherwise, the current season of this new show is available on CWTV.com and Hulu. 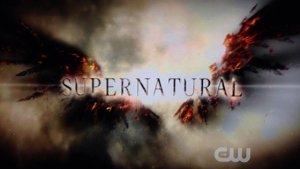 I explained the premise of Supernatural last week when discussing shows for guys, so I won’t repeat it.  If you like Sleepy Hollow, or if you ever caught Syfy’s Warehouse 13 (another blatant rip-off of the show), then you should like the original.  Otherwise, I don’t know what to compare it to, because before I saw its imitators, I’d never really seen a show like it.

Fan favorites Crowley and Castiel–both great with one-liners, but not so much with wardrobe changes.

The only two constant characters from all nine seasons are brothers Sam and Dean, but the angel Castiel has been with the show since season four, and the demon Crowley I believe has been around just as long.  I realize going back and watching eight back seasons (Netflix again) is a pretty large commitment, so if you want to just jump in, I honestly think you’ll be fine.

If you get bored in season one, you can laugh at Sam’s bad hair.

It’s worth going back, though.  I think I joined in somewhere around season six, so I had to do some decent catch up myself.  A warning: it took a little while for it to find its footing, so season one can be a bit slow.  I can’t stress enough, though, how funny this show is.  I usually watch it after my husband has gone to bed, and multiple times I’ve woken him up laughing so loudly.

Coming up on Wednesday:  I’ll take you through the Wednesday-Friday shows.  I know, you can hardly wait.  The surest way to get me to shut up is to give one of these shows a shot 🙂

Okay, I waited as long as possible. People, can we talk about the new pilots? Great. What? You said, “No?”  Too bad. I warned you multiple times that this was the blog of a TV addict.   I’ll have you know I have shown great restraint. I’ve had my fall TV spreadsheet made for a good month at least, and I am only just now submitting you to a series of posts about the new pilots. Yes, you read that correctly. Series. Disney villain laugh. Disney villain laugh.

For the sake of timeliness, I’m going to ignore any new show that I already know is not coming on until midseason. There seem to be a great number of these. Much to my consternation, some of the most promising pilots aren’t debuting until after January. Still, there is plenty to talk about now.

5. Dracula: NBC has a surprising amount of shows that look promising this season. They’ll need them. Parks and Rec is always wonderful, and they got a pretty solid hit out of Revolution last year, but once again the Peacock is nearly starting from scratch. Dracula isn’t arriving at the best time. Most of the public is suffering from vampire fatigue. However, I’m not one of them, and this show has two other strong pluses. Jonathan Rhys Myers is playing the title role, and he’s got a Downton Abbey producer at the helm. I imagine the NBC pilot most people are exited about is The Blacklist. I intend to watch it, too, but I’m never going to be as excited about James Spader smirking as Jonathan Rhys Myers in period costume. Premieres Fri. Oct. 25 @ 10:00 p.m. EDT on NBC

4. Sleepy Hollow: The trailers for this look semi-amusing, but they aren’t really what have me excited about this time-travel/crime drama mash-up from Fox. What sent me into a fangirl frenzy were the names Kurtzman and Orci. For those unfamiliar with Alex and Roberto (I like to think of us being on a first name basis), they are the amazing writing team that brought us the last two Star Trek movies and Fringe. Sniff, sniff. Sorry, I need a minute. I almost asked for a moment of silence in our household when I had to delete Fringe from last year’s spreadsheet. If the power duo are back writing and producing Sleep Hollow, I’m going to expect great things; I don’t care how convoluted the premise sounds. Also, they have Len Wiseman of the Underworld movies directing. When I read that, I almost got giddy. I don’t really know any of the actors in this apart from Orlando Jones, but I have always found him funny. Premieres Mon. Sept. 16 @ 9:00 p.m. EDT on FOX

3. Almost Human: This Fox pilot edges out Sleepy Hollow for me because the trailer is just so much more compelling. The premise of a cop in the future with an android partner is interesting. It’s also one of the pilots that has critics practically foaming at the mouth. I’m admittedly jealous every time I read an article about how amazing the pilot is when I know I have to wait until November. I do like Karl Urban, who plays the main character, but once again, it’s the people behind the show that have me excited. J.J. Abrams is producing, which after Alias, Fringe, and Lost used be enough to get me to watch anything with the man’s name attached. But then I saw Undercovers, Alcatraz, and Person of Interest. I’ve become a bit more discriminating in my Abrams’s TV series since. Now I check who else he’s doing the series with, knowing that Abrams is likely lending some money, but not much time. He does have a Star Wars franchise to produce, after all. The good news here is that the name partnered with Abrams for Almost Human is J.H. Wyman of Fringe fame, so I know I’m in good hands. Premieres Mon. Nov. 4 @ 8:00 p.m. EDT on FOX

2. Marvel’s Agents of S.H.I.E.L.D. : I’m not sure I even need to talk about this, because I’m not sure there’s a person on the planet who doesn’t already have their DVR programmed. Agent Colson is alive and solving cases with a team of young whipper snappers. I’m sure the guest stars will be epic. All of that would be enough, but I’ve got two more words for you: Joss Whedon. Premieres Tues. Sept. 24 @ 8:00 p.m. EDT on ABC

1. The Originals: Did I just lose all of my credibility with my number one pick? Sorry, I’ve got to be honest. The Vampire Dairies has been the show I have to watch the day it comes on for the last two years. One of the reasons TVD is so good is the amazing villain they’ve had in Klaus. Creator Julie Plec and actor Joseph Morgan have done a wonderful job creating a rich character whom I despised at first and now adore. The CW wanted to give The Originals their own spin off a year ago, but Plec asked for time to transform Klaus from villain to at least the beginnings of a hero. I am eager to see where they will go with the character now that Klaus is the lead of his own show. My only fear is that by giving the Originals their own series, the end result could be two great shows, or it could mean they gutted my favorite hour of television and replaced it with two mediocre shows instead. The Originals also gets bonus points because I’ve got my fingers crossed that Price Peterson will write the recaps of the show for TV.com. There’s no way he won’t watch it, so he might as well make some money while he does. Premieres Thurs. Oct. 3 @ 9:00 p.m. EDT on the CW before moving to Tues. @ 8:00 p.m.

I’ll report back on these to let other TV junkies know if the pilots lived up to my expectations. Other drama pilots I intend to give a try:

What new shows are you looking forward to?