I’ve been married for fifteen years now (I was a mere child when wed), so this year several old kitchen standbys that I received as wedding gifts gave up the ghost. I told my husband we’d officially been married a long time because we’re outlasting our registry. Because I’m a serious Type A nerd, I can’t just go to the store and get a simple replacement off the shelf. No, I have to research these things. For days. That’s right, I researched Tupperware replacement for days.

Now most people get excited about the next iPhone or perhaps the advancements in HD technology. Me, I geek out in the advancements in kitchen equipment. People, there are awesome new things out there I did not know about. I thought maybe it was just me that would get excited about these wonders, but on recent visits, both my mom and sister were intrigued by my new acquisitions.

So, I thought I’d share some kitchen love. Here’s a few of my new favorites.

Yes, it’s a unitasker, and I usually am not a fan of those. However, it doesn’t take up much room, and it does its one task really, really well. It also makes grapefruit spoons unnecessary, and they take up more room than the knife.

One side of the tool has a double blade that cuts down both sides of a segment at once. The curved knife side you use to cut around the rind. It cuts both the sides and the bottom of the segments away from the rind. Basically, once you’re done with the knife, your perfectly segmented pieces just plop into a bowl for eating and you can pitch all the stuff you don’t want into the trash.  Price:  Varies, usually between $4-7, depending on brand.  Can be found at Crate and Barrel or Amazon.

I had a pretty basic old colander that did the job that looked like this:

However, I was always trying to bend it to sort of make a funnel at one end so that it would pour its contents into bowls without slopping everywhere. All that bending is why it eventually cracked. It also had this annoying tendency to tip over at inopportune times. Really, though, when is it an opportune time for your colander to tip? This beauty solved my problem: 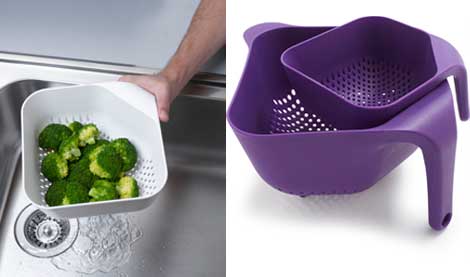 It sits firmly on little feet and pours exactly where I want it to. I happen to love that it comes in purple, too.  Price: Usually around $15 for the large size.  It’s in most home stores like Bed, Bath, & Beyond, and Amazon has a full complement of colors.

I have gone through a number of metal splatter shields. I don’t use them as splatter shields as much as for draining grease off of meat. They’re large and gangly, though, usually shoved into the same cupboard as my baking sheets and griddle where they die a slow death of many gouges until they rust out. When I went to look for a replacement this time, I found this silicone option. Oh, what a glorious day! All the little holes allow me to drain grease just fine, and the silicone handles the heat like a pro. Clean up is easier, I’m not ingesting any more rust, and it has held up to cupboard jostling a lot better, too. Now if only it came in purple.  Price: I’ve bought more than one of these now, some as gifts.  I’ve only been able to find them on Amazon, and the price fluctuates from $16-23. 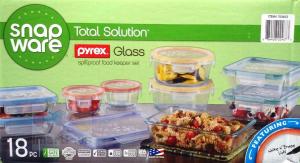 I’m a little embarrassed to tell you the total hours I spent researching food storage options before I settled on this one. But really, what is more frustrating that terrible Tupperware? Okay, a lot of things, I guess.

I wanted something BPA free that was microwave and dishwasher safe. I also didn’t want one round of spaghetti to turn them disgusting looking. I was leaning towards glass, but they absolutely had to be spillproof. Zero leaking, or I wasn’t interested. It would also be wonderful if they stacked with each other so they could take up less room in a cabinet. Oh, and something I didn’t know needed to be a criteria until I started reading reviews: if glass, it should be sturdy glass, not glass that occasionally released little shards into your food! Turns out wanting all of those things in a food storage container was asking a lot. Finally, I found these beautiful, beautiful babies. They met every criteria and even have lids that you can write what’s in the container and the date and then wipe it off/wash it off in the dishwasher.

Price: We found them cheapest at Costco ($29.99), who even has a coupon for them sometimes ($6 off). After a couple months with the first set, we bought another.  They are at most other home goods stores and online, but you can pay as much as $50 for the same set. 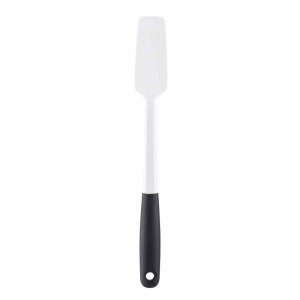 This is at least my second, maybe my third of these. This one is the best design by far. They have all had a great long handle and long, thinner spatula for getting into the nooks and crannies of jars. However, previous iterations have eventually been hacked up by the sharp edges of the jars themselves.   This model is much, much thicker so I am optimistic it might fair better. Price: around $7 and found at pretty much anywhere that sells home goods.

I think these have been around for awhile now, and I’m just late to the party. I had a natural bristle brush with a metal band that was hard to clean, and was constantly imparting “essence de rust.” The new one cleans up nicely in the dishwasher, and OXO’s model in particular has these nifty little holes that soak up and hold your basting liquid. Price: $8-12, and again is pretty widely available. 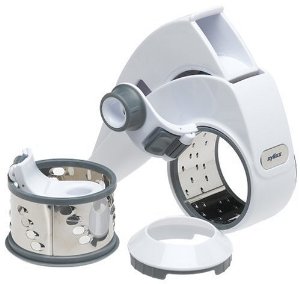 When my box grater died, I was not eager to buy another one. They’re known to grate skin as well as cheese and never seem to stay put on the collection plate. I bought this drum grater which has both a coarse drum for softer cheese like cheddar, and a fine drum for harder cheeses like parmesan. Overall, I am pleased with it and much prefer it to my box grater. However, I did have a piece of the coarse drum break within 6 months. Zyliss replaced for free after I emailed them a picture of the break. The handle could also be a bit longer, because it can be a challenge sometimes to get a grip on it to really get it going good. Still, miles above a box grater, but I could see where it might frustrate some. Price:  $14-22 and is a bit harder to find.  Crate and Barrel and Amazon both have it.