Thanksgiving is just a month away now. The cooking and women’s magazines are already starting to appear at the supermarket checkout, mocking you with their Martha Stewart perfection. This early, you might even still have delusions of grandeur and the ambition to try pheasant under glass. On Thanksgiving Eve, you’ll be tearing out your hair, though, screaming “What does ‘under glass’ even mean? Martha Stewart is Satan! Satan!” 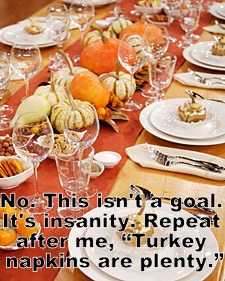 So, to avoid the eleventh hour mental breakdown, let’s just decide now to take the easy way out, shall we? That doesn’t mean your Thanksgiving dinner can’t look nice and taste good. It just means you’ll enjoy it instead of hating everyone around you and the horse they rode in on.

For the next month, I’m going to be doing a series of posts on how to make some of the Thanksgiving staples, but making it easier on yourself. Our first order of business is the pies. While everyone generally has a pumpkin pie, the second one is a wild card. In the South, it’s pecan, and I’ve also often seen apple. My family always insisted on blueberry.

There are certain ways you can cheat on pies, and ways you can’t. For the love of all that is holy, do not purchase a frozen grocery store pie. People often get tired after all the turkey and sides, and say, “Oh, I’ll just buy a pie.”  There’s a reason I’m doing this post first: priorities. While you’re still sane and fully rested, think about it. Which do you want to taste good–your dessert, or your creamed corn? Um- hmm, that’s what I thought.

No one likes to make it, and I’m here to tell you, you don’t have to. That’s right, don’t make your own crust. Yes, yes, it’s better if you make it yourself, but it’s time consuming and a royal pain in the butt. The key is which premade you go with.

Don’t use any of the frozen ones or any of the crusts that come already in their own tin. Not only do they all taste terrible, it’s also the first give away that you bought a store made crust. People see that cheap aluminum and the perfect uniformity to the crust edges and they’re already sighing with disappointment. 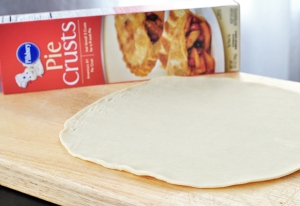 Use Pillsbury’s roll out crusts from the refrigerator case. No, do not save 50 cents and buy the store brand of the same product. It doesn’t taste as good. You’re already cheating here; buy the Pillsbury. They’re the closest to homemade I’ve tasted, and the real key here is you put it in your own pie plate and crimp it with your own little fingers. People assume you made it, and honestly, that’s half the battle. I get just as many people raving about my crust when I use the roll out crusts as when I make it from scratch.

Fruit pies are just more work, especially apple. If Aunt Bertha Jane thinks it just isn’t Thanksgiving without apple pie, then sweetly inform Aunt Bertha Jane, “I couldn’t agree more. I’ll put you down for bringing apple pie.”  If it’s your decision, don’t make one. Don’t cheat and use canned apple pie filling. Apple pies are for when you’re only bringing apple pie, not when you’re also hosting and cooking a bird. 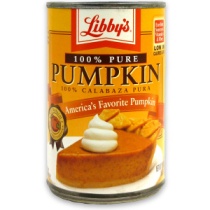 Roasting a pumpkin isn’t difficult, but remember, were not doing Martha’s Thanksgiving here. This is what the good people at Libby are for. Buy the canned pumpkin. If you really want to blow their minds, don’t even make pumpkin pie. Make pumpkin gooey butter bars. No one will miss the pie. A note about that recipe: don’t add the second stick of butter in the filling and only use 2 cups of powdered sugar instead of a pound. Paula can get a bit excessive. I promise they’ll still be sinful.

May I suggest pecan? 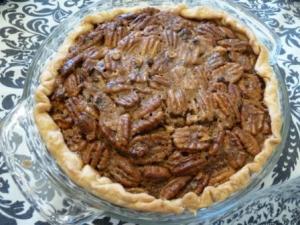 One of four (yes, 4) chocolate pecan pies I made around Thanksgiving last year with Pillsbury crust. They’re that popular. Doesn’t that crust look deceptively homemade?

If two pies are needed, I highly recommend the pecan pie. It comes together quickly and is a crowd pleaser. Plus, then you have two one-crust pies, using up your Pillsbury crust pack. This Chocolate Pecan Pie recipe is what I use, and every Thanksgiving it goes quicker than the pumpkin. I didn’t do this with the pie pictured, but have found roughly chopping the pecans makes it easier both to slice and eat. 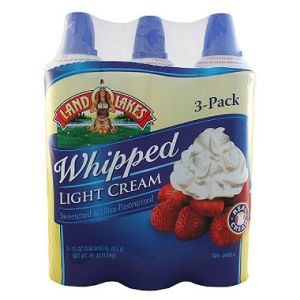 As a matter of fact, I do buy this in the 3-pack. No, it never goes bad. Whip makes everything better, people.

My family still insists on Cool Whip, and I can’t talk them out of it. Real whip that I beat myself is usually what I prefer, but on Thanksgiving Land O Lakes whipped cream from a can is more than okay.